Visitors arriving by boat to see the Cutty Sark can hardly fail to notice its large name emblazoned on its imposing Georgian façade. Built in the early nineteenth century, it is easy to feel the part it has played in the ebb and flow of time. Inside, a large sweeping staircase takes customers up from the downstairs wood-beamed bar to panelled rooms with panoramic views of the new city of London, Canary Wharf and the Millennium Dome. The décor is dark and minimal. In one room hangs an Admiral Robert FitzRoy barometer. He was one of the first men to attempt a scientific weather forecast and he introduced the first daily weather forecasts, which were published in The Times in 1860. He also picked Charles Darwin to travel with him on the Beagle.

A tavern has stood here from at least the 1740s when it was called the Green Man. At the time it was a common London pub name with possible links to pagan festivals and the celebration of May Day. In 1810 the pub was renamed the Union Tavern, possibly as a mark of support for the union of England and Ireland in 1801. It changed its name again in the 1950s when the famous tea clipper Cutty Sark docked in Greenwich. The pub’s address gives away the prevailing business of the area; empty cargo vessels returning home would dock to fill up with ballast before heading out to the open seas.

Nearby, on the Thames Path heading back towards Greenwich, is the attractive Trinity Hospital, the oldest building (1613) in Greenwich town centre. Set in the wall is a modern curiosity, a series of small three-dimensional murals called ‘Thames Tale’ by Amanda Hinge. The whimsy follows Stan and his dog along the Thames path. A children’s delight. it baffles most adults even before they’ve had a beer in the Cutty Sark.

If only more pubs were like the Trafalgar – it offers great food, good beer, fabulous views and a real sense of history.

Charles Dickens is to London what James Joyce is to Dublin, except Dickens’ London is one of dark shadows, labyrinths and intrigues. Today, the insanitary slums are long one but you can still sit where his sometime heroic and often unsavoury characters supped ale. One of the most potent symbols in Dickens’ Our Mutual Friend is that of the River Thames – its flowing waters are a sign of renewal and rebirth, and it is here at the Trafalgar that the book’s central characters, Bella Wilfer and John Rokesmith, held their wedding feast.

The Trafalgar stands like a piece of crumbling, iced cake, faded but not down. It is famed for its whitebait dinners often held upstairs in the Lord Nelson Room with its sweeping view of the curve in the Thames, the Isle of Dogs and towards the O2. In the nineteenth century senior Liberals and Tories would annually board rival barges and travel down the Thames for such a dinner. They must have marvelled at the cargo boats bringing wealth from the four corners of the Empire. Today the view is still impressive, but the cargo boats have been replaced by modern clippers taking tourists and commuters from the O2 to the London Eye.

Close to the Greenwich’s World Heritage site, the pub was built on the site of the George Inn in 1837. In 1915 it became the Royal Alfred Aged Merchant Seamen’s Institute and became a pub again in 1965 when it was painstakingly restored. Take a sip of the appropriately named Nelson’s Bitter, enjoy a plate of the famed whitebait and imagine the happiness of John Rokesmith, who not only married his true love Bella but had his inheritance returned to him. Whoops, I’ve given away the ending.

A Walk Along the Serpentine in Hyde Park

From Hyde Park Corner by the Park Lane subway on the right, following the signs to the Wellington Museum. Turn right at the top of the steps. Go around the front of Apsley House and then turn right through the gates, crossing South Carriage Drive into Hyde Park. To the right is yet another tribute to Wellington (and also his men) – a statue of the legendary hero Achilles, cast from captured cannon. Wellington was often referred to by grateful contemporaries as the ‘Achilles of England’.

There are two main paths to the left leading through Hyde Park. The first one on the left with a sanded track for riding is Rotten Row, the name thought to be a corruption of Route du Roi, the royal road built by William III in the 1690s, leading from Westminster to his new palace at Kensington. The walk, however, takes you along Serpentine Road, the much wider path on the right.

Walk along the road past the cavalry memorial and bandstand. Soon you come to the Serpentine Bar and Kitchen and the Serpentine Lake, created in 1730 by damming the River Westbourne. Activities on the lake include swimming from the end of May to mid-September and boating, and sometimes skating in winter. In 1826 a businessman won a bet of one hundred guineas by driving his van and four horses over the frozen lake. To the left you can see the tower of Knightsbridge Barracks. Over to the right the large boulder was placed here by Norwegian seamen in 1978 as a token of gratitude for hospitality and support received during the Second World War. Beyond it, behind the hedge and thick screen of trees, there are four acres of greenhouses where all the bedding plants for the royal parks are grown.

Just before the bridge, take the right fork along the left-hand side of the car park on to the road dividing Hyde Park from Kensington Gardens. Turn left opposite the Magazine (a gunpowder and ammunition store built in 1805 and now used by park maintenance staff) and cross the bridge. Half-way across there is a fine view of the Houses of Parliament. On the far side of the bridge, turn right, crossing the road through Temple Gate into Kensington Gardens.
Sculptures and statues 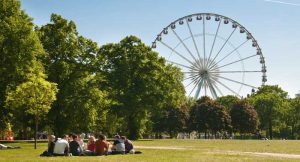 On your left now is the Serpentine Gallery, built in the 1930s as a tea house and now an Arts Council-sponsored gallery for modern art exhibitions. Take the path on the right leading down to the lake, here called the Long Water. To the left above the bank you can see the Temple, built in the 18th century for Queen Caroline, the wife of George II. Queen Caroline also ordered the digging of the Serpentine and of the Round Pond, which you come to shortly. Further along, the path enters a small piece of riverside woodland and garden with an extraordinary statue of Peter Pan in the centre. J.M. Barrie was living near Kensington Gardens when he wrote the Peter Pan story and he reputedly had the statue erected overnight, so that when children came for their daily walk they would think the fairies had brought it.

Immediately beyond the woodland turn left across the grass towards the obelisk memorial to John Speke (in summer only the base is visible through the trees). Speke was the first explorer to trace the source of the Nile to Lake Victoria in 1864. Looking left from the obelisk, the east front of Kensington Palace and the graceful spire of Kensington parish church (St Mary Abbots) can be seen at the end of the broad avenue to the left. Walk up the avenue (or use the tarmac path in the trees to the right if you prefer) until you come to the Round Pond.

Walk to the right of the pond, aiming for the white statue of Queen Victoria (by her daughter, Princess Louise) in front of the palace. (The Orangery café is to the right.) Turn left along the Broad Walk and then take the first right turn along the south front of the palace, passing the immaculate gardens, often with rabbits playing on the lawn. The statue in the middle of the gravel walk leading up to the palace is of a wigged and hatted King William III who, in the 1690s, commissioned Wren to convert Nottingham House into Kensington Palace because he hated stuffy old Whitehall Palace down by the Thames in Westminster. Queen Victoria was born at Kensington Palace and lived there until she inherited the throne in 1837 at the age of 18. Diana, Princess of Wales, lived here until her death in Paris in 1997.

Billingsgate fish market moved to this modern warehouse location in 1982 from Lower Thames Street in the City, from where it had been trading for nearly a thousand years. The market continues the great tradition of London’s fish trade and still has a great atmosphere. If early mornings are not a problem for you, and you are after the best fish in London, this is the plaice (sorry) to visit for an opportunity to see the largest selection of fish in the United Kingdom.

Daily arrivals from the coast and overseas ensure fresh supplies and, with some 65 merchants trading in close proximity in the market hall, competition is keen. Every type of fish, and seafood you can imagine is here, from white sturgeon and salted cod to Norwegian salmon and lobsters from Canada. Some of the traders are wholesale only, but many will do business with individuals, and it is certainly worth asking. In addition to the wide selection of fish and shellfish, you will also find stalls selling utensils and specialist catering supplies. If you want a bite to eat, there are two cafés on the premises.

Now located at Nine Elms in Vauxhall, the famous wholesale market now houses some 300 companies in two principle buildings – the Fruit and Vegetable Market, with its annexe, the Pavilion, and the Flower Market. Some 70% of the food available is imported from abroad, so you can find almost anything in the world here in its season.

This is primarily a wholesale market, but individuals are welcome as long as they buy in wholesale quantities – though this can be as little as a kilo of mushrooms. On Sundays, when the main market is closed, there is a small retail food market which offers meats, cheese, eggs, bread and some fruit and vegetables. 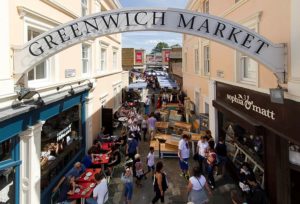 A visit to Greenwich deserves at least a day: there is the National Maritime Museum, the Greenwich Observatory, the Cutty Sark – and the markets. Sunday is the most popular day for the latter,
which offers antiques, bric-a-brac, crafts, books, and new and old clothes in a variety of locations, both under cover and in the open air. Saturday, though, is the day to go for food. By the side of the Village Market, some half a dozen or so traders offer organic foods including olives, olive oils, eggs, cheeses, bread, meats, sausages, fruit and vegetables.