If you are starting from Kew Bridge Railway Station, turn right and at the traffic lights cross to Kew Bridge and join the riverside path to go upstream (right) towards Richmond – a 10-minute walk at the most. Alternatively, it takes about 15 minutes to reach the river from Kew Gardens Underground and Railway Station: cross the area in front of the station obliquely right to head down Station Approach. Turn right at the end down Leyborne Park (the alley which runs parallel is rather dark and grubby). Turn left at busy

Mortlake Road and, at the traffic lights, cross Kew Road to Kew Green. Cross the Green on the path that goes obliquely behind St Anne’s Church, which was built with the help of a £100 donation from Queen Anne in the early 18th century. The slab of gravestone surrounded by railings on the south side of the church is where the 18th-century court painter Thomas Gainsborough (1727-88) is buried.

The elegant Georgian houses round the Green date mainly from the late 18th century, built for courtiers and officials who served King George III’s (1738-1820) summer residence at Kew. There have been royal palaces in Kew and Richmond since medieval times, and the Royal Botanic Gardens evolved from the gardens that were laid out around the palaces; the main entrance to Kew Gardens is to the left of the Green.

The Making of Kew
The future Queen Caroline, wife of George II (1683-1760), set the ball rolling by hiring William Kent (c.1685-1748) and Charles Bridgeman (d. 1738) – both pioneers in the golden age of naturalistic landscape gardening – to lay out the grounds of Richmond Lodge in the Old Deer Park, which we pass later. At the time of Caroline’s death, in 1737, the gardens reached as far as today’s Kew. But it was her son Frederick and his wife Augusta who were responsible for creating the first Kew Gardens around their (since demolished) palace. After Frederick’s death, Augusta, with the help of architects and horticulturalists, began collecting rare and exotic plants. Some of the trees planted at that time are still living, including the first pagoda and ginkgo trees introduced to England, and the Orangery and Pagoda (the structure as opposed to the tree) are surviving buildings. The next king, George III, built on Augusta’s work and, with the naturalist Sir Joseph Banks (1743-1820), consolidated Kew’s place as a superlative collection of plants from around the world, and opened the gardens to the public. 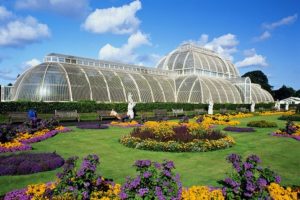 Cross from the Green to Ferry Lane, which once led to the Brentford ferry that carried horses, carriages and people across the river from the mid-17th century until the 20th century. Turn left along the river bank (signed Kew Gardens), via the towpath. Just downstream, the first Kew Bridge was built in the 1750s, though the present bridge dates from 1903. Across the river is Brentford and an island called Brentford Ait that is lush in high summer with oak, willow and poplar trees in full leaf. Between the 14th and 18th centuries, osier willows for basket-making were cultivated on the island. The word ‘ait’ is a corruption of the Anglo-Saxon eyot (islet). There are several aits along the river, formed from silts and gravels washed down by tributary rivers. The next is Lots Ait and shortly afterwards you can see where the River Brent meets the Thames.

In the 18th century, the elegance of Brentford almost matched that of Kew and Richmond. In the 19th century, however, the outlet you see across the river was a busy dock, where the Grand Junction (later Grand Union) Canal joined the Thames, and was later the terminus of a branch line of Isambard Kingdom Brunel’s Great Western Railway. Instead of the smart marina and waterside development there today, you would have seen concentrated activity: barges lined up along the wharves, some laden with coal and lime and others ready to take produce from market gardens or hay for the working horses of London. From the mid-19th century until the dock’s closure in the 1960s, the scene was packed with warehouses and railway freight yards.