“Aimed at visitors and Londoners alike, this fully updated edition of Secret London unlocks the city’s most fascinating secrets – both above and below ground. Celebrated historian Andrew Duncan str 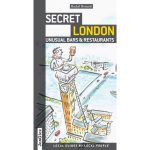 ips away bricks, mortar and tarmac to uncover parts of the capital that even born and bred Londoners may never have seen. Below ground, he guides readers through an extraordinary honeycomb of structures – from the government’s vast system of offices and tunnels under Whitehall and through abandoned Underground stations to Clerkenwell’s amazing network of subterranean prison cells. Above ground, he leads the way through narrow alleyways and cobbled mews, revealing unexpected treasures and describing rarely seen interiors and special collections. Opening times and addresses, detailed route maps and evocative photographs complement a fascinating text that is sure to delight all urban explorers. Both cover and inside design have also been comprehensively updated for this edition.”

London is strewn with waterways, but the River Thames twisting through the capital can be seen from a radically different perspective in the futuristic Docklands area to the more sleepy suburbs of Putney, Chiswick and& Barnes. Much of Camden’s quaint charm would be lost without the Regent’s Canal, and further out in the suburbs the Wandle, Lea and Brent rivers are well worth discovering.

Walking London’s Waterways is an exploration, in 21 carefully researched walks, of London’s varied waterways in all their glory. Gilly Cameron-Cooper’s engaging text is steeped in historical detail, and is accompanied by clear and detailed route maps and enchanting photographs. 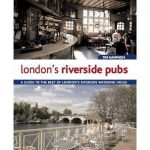 Applying the winning formula of London’s Best Pubs to focus on riverside watering holes, this book shows the best that the capital has to offer along the Thames and the Grand Union Canal.

Extending from Walton-on-Thames to Thamesmead, the book features 100 pubs, giving a variety of venues for the perfect afternoon by the river. Divided by area and accompanied by photography showcasing both exteriors and interiors, the pubs described here will appeal to a broad range of visitors, both tourists and London residents alike.

Every entry features an overview of the cask ales on offer, together with informative historical and architectural snapshots and details on the character of each pub.

THE AUTHOR AND THE PHOTOGRAPHER
Tim Hampson is a writer and regular broadcaster on beer and public houses. Chairman of the British Guild of Beer Writers, his work appears in the Telegraph, Food & Travel magazine, What’s Brewing and Morning Advertiser. He has also appeared on BBC Good Food Live and Sky TV.

Jon Meade is a London-based photographer who specialises in architecture, people and spaces.