The Ten Bells pub is indelibly linked with the legend of Jack the Ripper. Its interior, resplendent with a magnificent tiled wall panel depicting the days when this area was countryside outside the City of London, has hardly changed since the early hours of 9th November 1888, when Mary Kelly, Jack the Rippers final victim, left the pub. Her horrifically mutilated body was discovered next morning in Miller’s Court, off Dorset Street on the opposite side of the road from The Ten Bells. Indeed, for many years in the 1970s and 1980s, the pub was renamed Jack the Ripper, until, thanks largely to a landlord who was tastefully selling dark red ‘Ripper Tipples’, the brewery decided to return it to its original name in 1989. 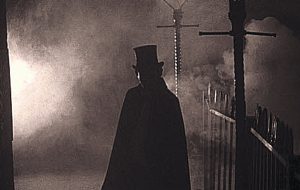 In the late 1990s live-in staff, whose bedrooms were on the upper floors of the building, began to complain of alarming encounters with a ghostly man dressed in Victorian clothing. They, were often awoken by an uneasy feeling in the dead of night, and would find his phantom form lying beside them on the bed! As soon as they cried out in shock, the figure disappeared. Staff with no previous knowledge of his ghost would often report seeing him, and their descriptions would always be the same. Nobody had any idea who he was and those who had occasion to live on the premises, learnt to accept him as the pubs oldest resident.

In June 2000, however, a new landlord took over the pub and decided to clear out the cellar. He found an old metal box hidden away in the corner, and opening it, discovered the contained the personal effects of a man called George Roberts. The items dates from the early 1900s and with them was a brown leather wallet, inside which was a press cutting from the same period that talked of his having being murdered with an axe in a Swansea Cinema. Further research revealed that a man named George Roberts had indeed kept the pub in the late 19th and early 20th centuries and the landlord concluded that it was his ghost whom staff had been encountering.

A tenant who lived on the premises in 2001 often heard footsteps followed by a faint peal of laughter outside his door, even when he was the only person on the premises. Whenever he investigated the sounds, he found the corridor outside empty. Going down into the bar to investigate further, he was often pushed hard on the back by an invisible hand.

A psychic was once brought to the pub to see what she could pick up on the premises. Having reached the top floor, she paused outside one of the rooms and refused to go any further. She said that she could sense that something terrible had happened in the room and was almost certain that it involved the brutal death of a baby in the 19th century.