This looks at the Great Portland/theatreland area of London and in particular looks at the ghosts of Broadcasting House and the London Palladium. There are many strange goings on in London and with a city with so much history there are bound to be a few ghosts to be found. If you know where to look.

The Ghosts of Broadcasting House

Go over the zebra crossing and pause outside Broadcasting House. Built to provide twenty-two soundproof studios for the BBC, it remains largely unaltered since being first occupied on 2 May 1932. The figures above the main doorway were sculpted by Eric Gill (1882-1940) and show Shakespear’s Arie, as a symbol of broadcasting, being sent out into the world by Prospero. 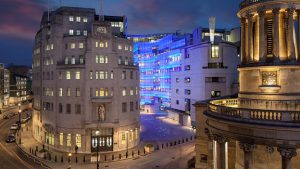 In 1937 the figure of a man was seen limping about the fourth floor of the building. He wore old-fashioned clothes and sported fine, twirling whiskers. So real did he look that witnesses took him to be a senior member of management until, to their astonishment, he began to dissolve before their eyes. Other ghosts seen here have included a spectral waiter who wanders the corridors, and a musician who appears lost. When people approach to help, he responds by shaking his head and vanishing.

Continue along Great Portland Street, go over Oxford Street and then turn right off the pedestrian crossing to take the first left into Argyle Street. Go halfway along. Opened in 1910 and officially named The London Palladium in 1934, the theatre gave its first suggestion of being haunted in March 1973 when a doorkeeper revealed the existence of the ghost during a television interview.

Located at the rear of the Royal Circleis the old Crimson Staircase, said to be a leftover from the 18th-century Argyll House that formally stood on the site. A spectral lady in a crinoline dress glides gracefully past those who are ascending the stairs. She has been seen by theatre hands, usherettes and even visiting artists, although nobody can be sure who she was. A possible contender is Mrs Shireburn, mistress of the Duke of Argyll, who lived in the house 1750-62. Perhaps the sound of the orchestra, the rustling of the audience or the adrenaline-charged air of the stage during a performance is what attracts her.

Continue to the end of Argyle Street, go left into Great Marlborough Street, cross at the pedestrian crossing, and go left and then first right into Carnaby Street where, a little way along you arrive at the Shakespear’s Head pub. A board on the wall gives a detailed history, and above that sits a hollowed-eye, dejected looking bard, no doubt bemoaning the loss of his writing hand, blown off by a bomb during the blitz.

To continue with this haunted route, get your copy of the book and see what other spooky goings on there are to be found in London.