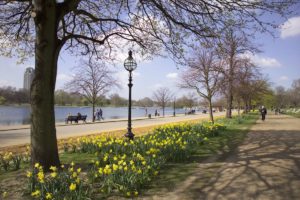 Seasonal features – The Flower Gardes in spring and summer; the Dell in winter and spring; autumn tree colour.

The park dates back to 1536, but instead of stating the history this post will focus on the Hyde Park walk. (Start/finish Marble Arch | Time allow 1¼).

Marble Arch was erected at Hyde Park corner in 1851, as the main gateway to the park, but in 1918 it was severed from the park by traffic, and today it is outside the park boundary, isolated on one of the busiest traffic roundabouts in London. Reach it via subways 4 and 5 from Park Lane or from Marble Arch Underground Station, emerging at Exit 3. A recent scheme for an underpass to bury the traffic extends from Marble Arch to Hyde Park Corner, so creating a piazza to rival St Marks Square in Venice, with the arch as its centre piece.

The arch was to have been the main gateway to a remodelled Buckingham Palace and a memorial to the victories in the wars against Nepoleon, but when finished it was said to be too narrow for the state coach. When Queen Victoria had the front of the palace rebuilt, it was moved to this sport. Designed in 1827 by John Nash, with decoration by artists such as John Flaxman, Marble Arch is a dream of pure white Italian Carrara marble, styled on the triumphal Arch of Constantine in Rome. It originally carried a statue of George IV rising from horseback without the aid of stirrups, which is now in Trafalgar Square. The arch is hollow and housed, a tiny reporting police station in the days before radios. There are gatekeepers’ rooms above, unused for many years now, although there have been recent proposals to let them out as an apartment. They have twisting staircases 2 feed (60 centimetres) wide, vault brick ceilings, Regency fireplaces and portholes as windows.

The early 20th century bronze gates open onto what is believed may have been the site of the Tyburn Tree, the public gallows for two centuries, until they were moved to Newgate in 1783. There is a memorial stone on the floor of the small traffic island at the mouth of the Edgware Road. Condemned prisoners were transported to the gallows by cart, on which they stood for the noose to be put around their necks, then the cart was whipped away. Up to eight unfortunates could be hanged at a time on each of the gallows’ three sides. Most were not hardened criminals but impoverished citizens who were down on their luck. The laws of the time were a morass: to take fruit from a neighbour’s tree was a minor crime, but to steal fruit already picked was a hanging offence. Hanging days were like public holidays, with crowds of spectators avid for morbid entertainment. As a joke, the highwayman Jonathan Wilds picked the chaplins pocket of a corkscrew, which he held while dying. This part of London is a haunted place.